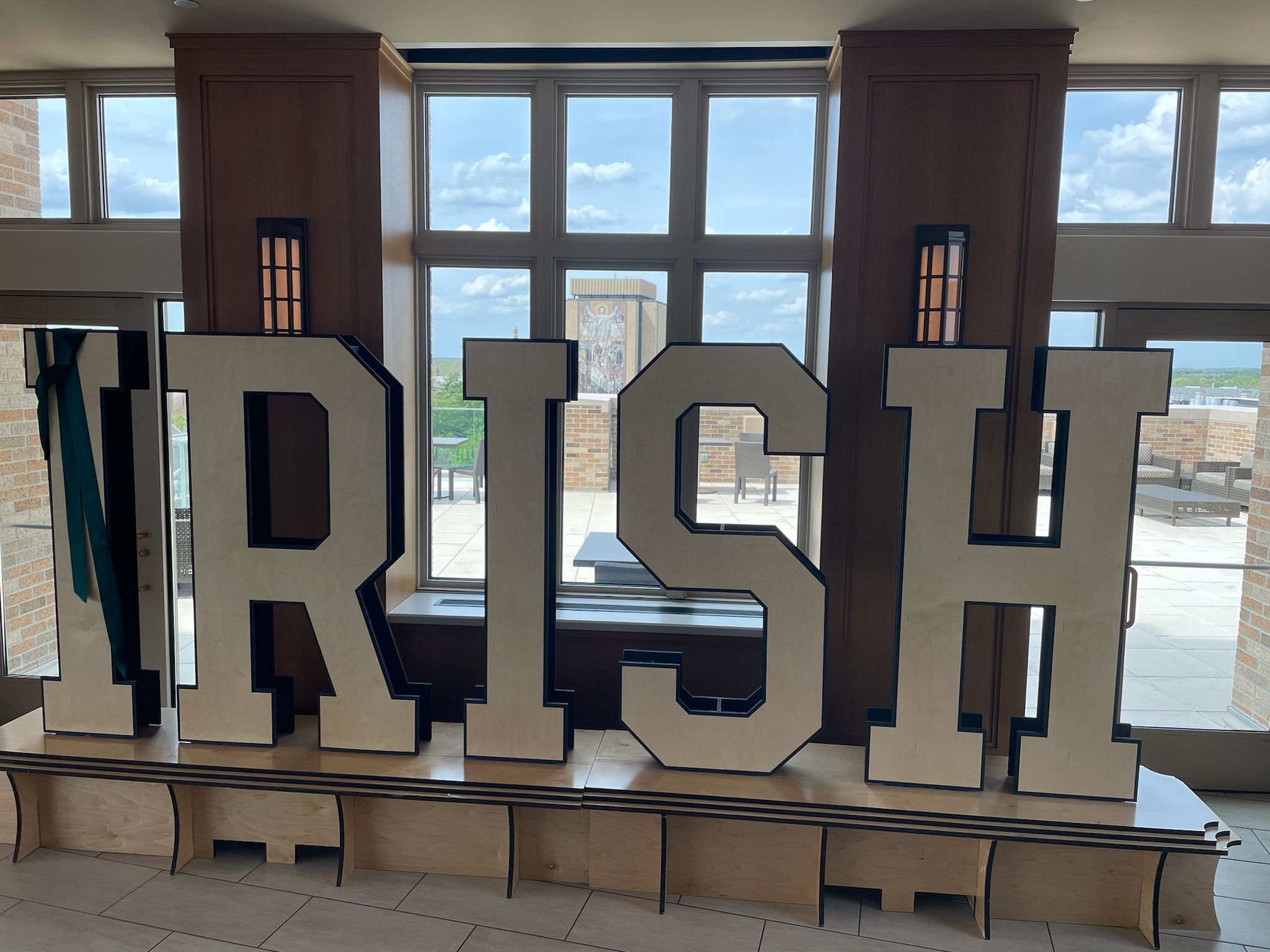 When the weather turns humid in August in Northern Indiana, you know what time of the year it is. Yes, the 2021 Notre Dame football season is officially underway. Fifteen grueling days of pre-season practice and players fighting for a spot in the starting rotation is on the mind of all of them. First day includes spider pads and donning the helmet and a focus on execution. The road to a National Championship is underway, now it’s about putting in the the work and working towards that goal.

Coach Kelly needs to fil some big shoes after having fourteen players get signed to NFL contracts. The questions on the table are: 1) Who will be the starting QB? Will it be the transfer grad student Jack Coan, Drew Pine or Tyler Buchner? A similarly equal question is who will protect that QB once selected? The offensive line lost Liam Eichenberg, Robert Hainsey, and Aaron Banks. Those were some big bodies that protected Ian Book the last couple years. Coach Kelly and his staff will gather once again and put the absolute best team together for Game 1 against Florida State September 5th.

The Day One Press Conference

After practice on Saturday, Coach Kelly got together with the media and field a wide array of questions. Questions from Jarrett Patterson to who emerged as team leaders. Let’s walk through some of the questions that were asked during Coach Kelly’s media availability.

Media Question: On Jarrett Patterson moving back to Center.

Coach Kelly Response: “it’s a permanent thing. He’s going to be our starting center. You know, I think as we looked at you know a couple of things. One what’s in the best interest of Jarrett Patterson? First you know he’s one of the top centers in the country. You know it’s hard for me. You know take a player and really put him in a position where it could affect him you know down the road. He’s done so much for our program. Could we be better served if he played another position, you could make the case. I think feeling was we’re a good football team with Jarrett Patterson at center. It helps him in the long run playing that position.”

Media Question: “On Linebackers next to Drew White and the corners and how their competition is over the summer?”

Coach Kelly Response: “Oh my gosh where do I start? I mean you’ve seen all those linebackers. I mean you know we we’re so deep at that position. You know, if I’ve asked Marcus once, I’ve asked him ten times. How are we gonna get all these guys involved? So, I mean I should sit next to you guys, and we should put Marcus up here. Because I ask the same questions.”

“You know we’re deep there, so when you’re deep at a position you’re trying to be creative. You’re trying to look at situations where can somebody you know play situational. Can somebody be you know in our three-down package, you know can we maximize them there. So, we’re seeing the same things you guys are seeing from that perspective. When you look at the depth chart, and you look at how well JD Bertrand is progressing and the size and weight that you know Liufau has put on and and you know the guys that are already been in the program so yeah that’s an interesting proposition.”

Media Question: “Can we assume three Corners with Lewis, Bracey and Hart or are there a lot more?”

Coach Kelly Response: “No, I don’t think you can rule out Henderson. You know he’s really emerging, you know he’s long, he’s athletic, he’s playing with a lot more confidence. I think you got to add him into the mix there as well. You know somebody’s got to play nickel, right. So, you guys got to think about three corners, right? You got to think about an inside corner, and an outside so you got to think about three. So, for those positions, you’re really talking about the need to be at six. You know and that’s kind of where Marcus wants the defense to be. That he wants to be able to look at six corners from that perspective.”

Media Question: “On leadership perspective over the summer?”

Coach Kelly Response: “It’s like a new generation of guys out there from what you’ve had the last couple years. Yeah, so you know we had 14 guys that were in leadership roles and they were outstanding. We voted for captains, I’ll announce captains on Monday. Once our faculty board clears them, but I would say that it’s probably, I could confidently say it’s the deepest group of leaders that that I’ve had here. You know 2019 we had seven captains. This looks like it could be similar from that perspective. Just really good leaders, well respected, can carry the standard of what our program is about. So, the 12 guys you saw up front. Add Houston Griffith to that and Jack Coan and those are the 14 guys that have leadership roles in our program.”

Media Question: “About the timeline of the quarterbacks, how important is that to make a decision early?”

Coach Kelly Response: “It is really important, but all of these guys in particular Drew and Jack have a lot of respect and our guys. We just feel like we’ve got a pretty good sense of where this is going to go. We want to make sure that we’re going to make the right decision and give everybody the chance over the next week to make their case.”

Day one is the essential step needed to kick-off the decision-making process. The QB’s will have till the sixth practice to plead their case for the QB1 position left by Ian Book. The defense will need to figure out their defensive back position and how to get all those guys playing time. The one thing you can be sure of is this, Notre Dame football wants to get to the National Championship and win it all!

One thought on “Notre Dame Football: Day 1, The 2021 Season Begins”