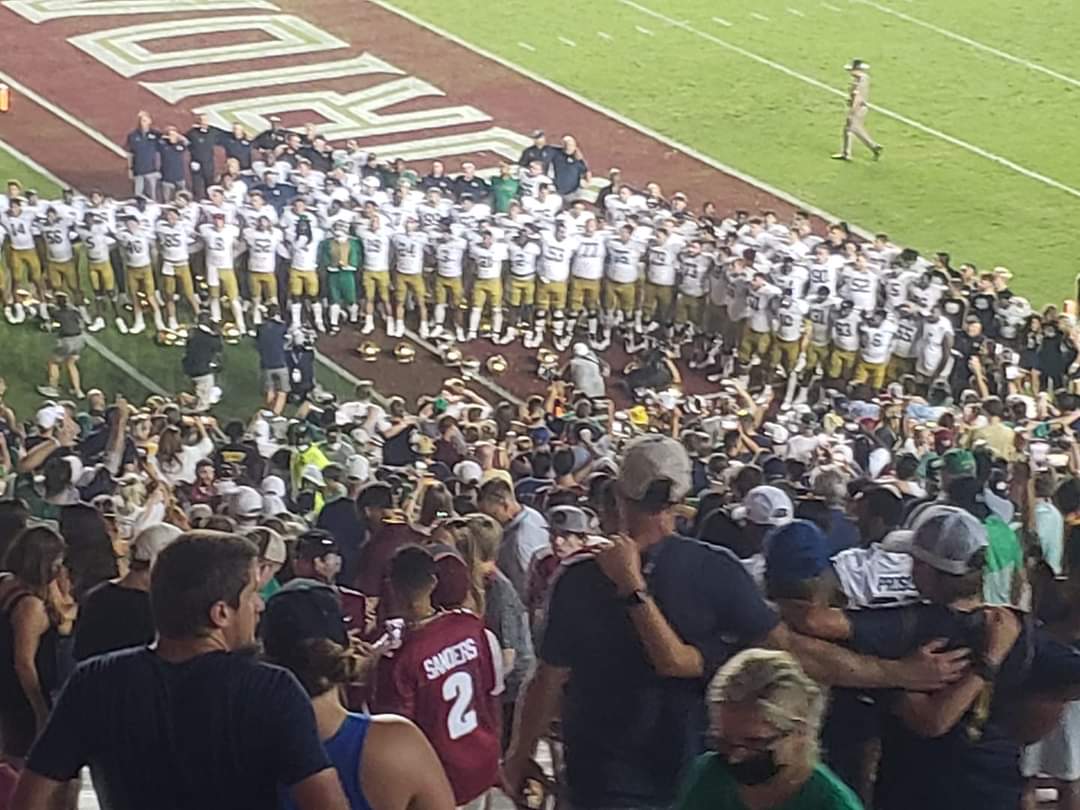 The cardiac kids are back! There is no other way to put it. Week one games are always interesting. Their is rust to kick off. There is the whole deal of getting into a game week routine. Then there’s the execution of the game plan. QB1 Jack Coan really displayed some great traits of a QB. No one can argue that the kid isn’t a gamer. Some key injuries on the offensive line, forced the Fightin’ Irish to retool and go to Plan B. The defense stopped the Seminoles passing game. But, the ‘Noles definitely knew they could run on the ND defense and they did often. The big question from everyone on social media, and from the broadcast team was, why is ND going with a three man defensive line and letting the “Noles back into the game?

The opening drive for the Fightin’ Irish was just epic. Jack Coan’s first pass as QB1 went to Michael Mayer for 25 yards. After a “false start” penalty and sack, Coan finds Braden Lenzy for 15 yards. Coan and Mayer hook up for a 1 yard pass and then cap the the drive with a 41 yard TD pass. The drive took 5 plays/75 yards and took 2:09. This first drive was the best drive of the quarter.

The Fightin’ Irish on defense was another story. The first two drives for the “Noles had (-19) yards on six plays. The only blown play by the defense was a Jashaun Corbin 89 yard TD run to tie the game at 7-7. On the previous drive, Justin and Jayson Ademilola got together and dropped Jordan Travis for an 8 yard loss. After the TD run by the ‘Noles, the defense again came up big again. Isaiah Foskey ended the quarter with a sack on Travis as well.

The second quarter opened up strong for the Irish defense. Rylie Mills opened the quarter with his own sack on Travis. Mills got the ball to come loose. Foskey picked it up for a scoop and score (or so they thought). After review, Travis’ knee was ruled down on the play. The Irish on the next drive started with bad field position on the ND7. The Irish go three and out and give position to FSU on the ND45. Four plays later, Travis runs it in to give the “Noles a 14-7 lead at 10:09 in the quarter.

The Fightin’ Irish running game still can’t get started in the second quarter. The offensive line just couldn’t get the holes made for the running backs. The passing game and Coan were getting it done. Coan was able to combine with Kevin Austin for 8 yards and Williams for 15 yards. The offensive line also couldn’t keep Coan of the turf. Coan took a sack for (-2) yards. Jonathan Doerer was successful on the 48 yard FGA to bring the score to 14-10 “Noles.

The Fightin’ Irish defense tightened up and forced a three and out after two penalties by the “Noles. Kyle Hamilton got his first INT of the season after a Bo Bauer hurry on Travis. The Fightin’ Irish taking full advantage of the situation. They a 4 yard rush from Williams. A 15 yard pass from Coan to Mayer, and a 6 yard rush by Coan. That sets the Irish up for the next play. Coan gets the ball to Joe Wilkens in the endzone for a 23 yard TD pass. The Irish go back to the lead 17-14. Isaiah Foskey again ends the quarter with a sack on Travis. The Fightin’ Irish take a 17-14 lead into halftime.

FSU wanted to come out of the break and make a strong point, and they most definitely did. After two small run plays, Travis hits Ja’Khi Douglas for a 60 yard TD pass. The “Noles attempted a two point conversion, and they fail to convert the score goes to 20-17. The Fightin’ Irish responded very well to the “Noles quick drive. They respond with their own quick score. A pass to Austin for 29 yards, pass to Williams for 6 yards followed by a 3 yard rush. Those quick plays set up the 37 yard TD pass by Coan to Austin to put the Irish up 24-20.

The Fightin’ Irish defense was once again tightening up. On the second play of the FSU drive, Hamilton covers half the field for an INT. Williams, having a better day at catching the ball than running makes a big play for the Irish. Coan connects with him for 55 yards. The next play, Coan hits Austin for 17 yards. This sets up the Williams 6 yard TD catch and a score of 31-20.

The Irish defense comes up big , yet again. Clarence Lewis picks off Travis and sets up the next Irish score. Coan connects with Braden Lenzy for a 24 yard pass and then a 3 yard rush by Chris Tyree. Tyree scampers to the endzone for 1 yard TD run. The Irish boost their lead to 38-20. But trouble is lurking in the swamp.

In 4:37 seconds the “Noles move the ball 74 yards to end the quarter. The Irish defense went to a three man line and was just giving the ‘Noles opportunity after opportunity. The quarter ends with FSU on the 1 yard line.

FSU scores at the beginning of the fourth quarter. They also convert on the two point conversion to set the score at 38-28. The “Noles were not done on offense or defense. They “Noles defense shutdown the Irish offense as well, the entire fourth quarter. The best offense out the Irish came on Jay Bramblett 50 yard punt that flipped the field. He pinned FSU at their own 12 yard line. Remember the “Noles had problems in the passing game all night. Besides the soft defensive play calling, McKenzie Milton wasn’t in the game. After Travis’ helmet came off Milton came into the game supposedly for one play. The ‘Noles caught lightning in a bottle. Milton, marches his team 48 yards that results in a touchdown and a score of 38-35.

After the Irish go three and out, Milton comes back on the field and marches once again. This time, FSU is stalled at the ND25 and kick a 43 yard FG to tie the game at 38. FSU overcame an eighteen point deficit starting at 4:37 remaining in the third quarter. The Irish are given an opportunity to strategize after FSU calls timeout. The Irish draw up a pass play that would bring Doerer in for a FG, but the pass is dropped by Mayer. After 60 minutes the game is tied 38-38.

Notre Dame wins the coin toss and opts for defense first. FSU gets to the ND19 and is forced to kick a field goal. The FG is missed as it goes wide left from 37 yards out. The Irish didn’t do much with the ball either in OT. From the FSU23, Doerer nails a 41 yard FG to win the game. Your final score is 41-38 ND sneaks out of Florida with a road victory to start the season.

You couldn’t ask for more out of Jack Coan. 26-35 for 366 yards and 4 TD passes. Coan was able to maintain his composure and do what he needed to do. Kyren Williams had more receiving yards (83) and a TD, rushing he was held to 42 yards. Kevin Austin got 91 yards receiving and a TD. Joe Wilkens had 23 yards and a TD as well. Chris Tyree wrapped up the scoring with 1 rushing TD, 31 rushing yards and 10 yards receiving. Moving the ball through the air was not a problem.

The defense got 5 sacks on FSU from five different players. The defense also contributed to 21 points as Kyle Hamilton had 2 INT’s and Clarence Lewis snagged one.

The Toldeo Rockets will be the first team to venture to Notre Dame Stadium this season. The game will kick-off at 2:30 PM EST on Peacock.