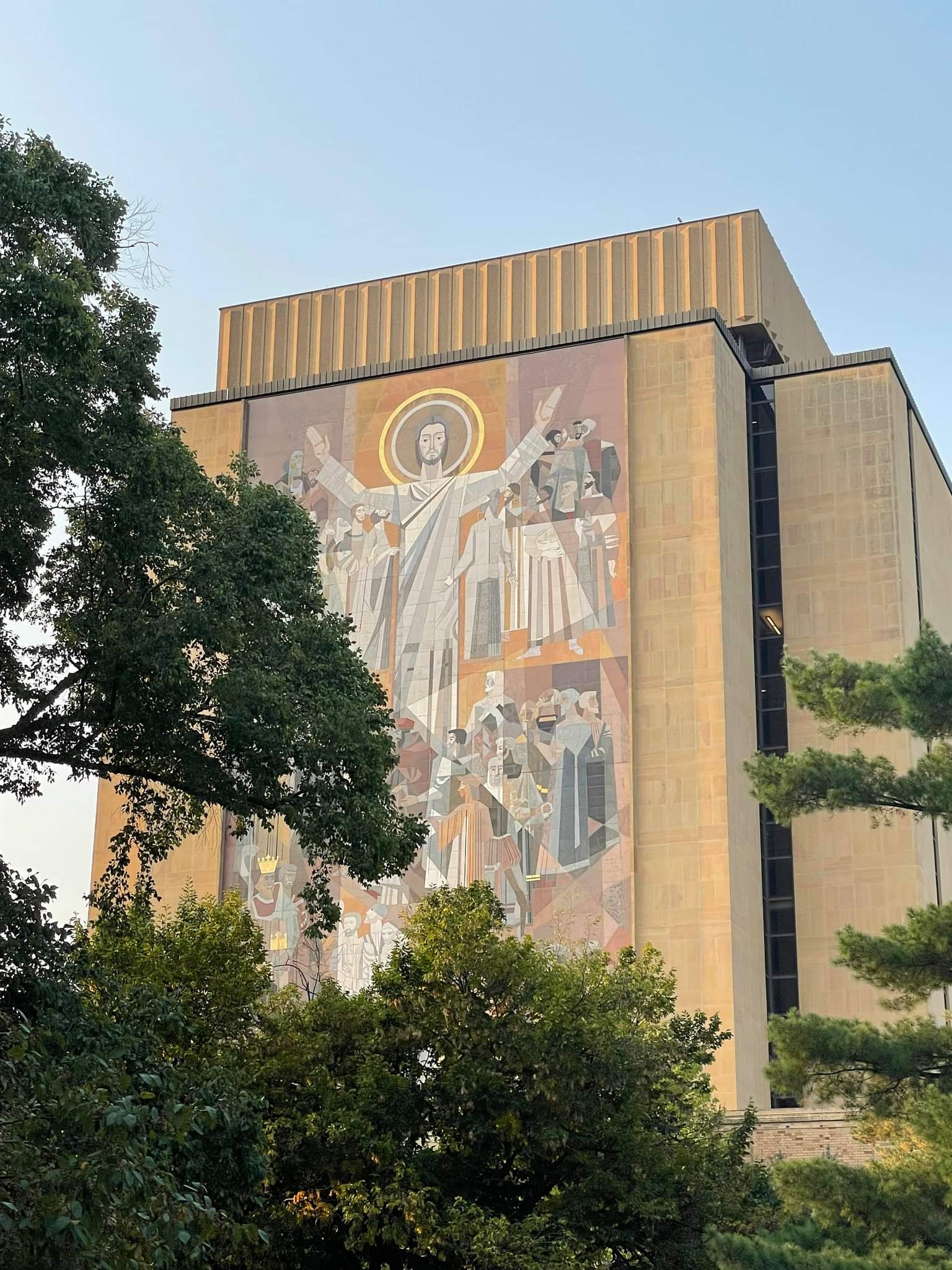 Week two is in the books and are facing some adversity early. Injuries continue mount up on the offensive side of the ball. The injuries are more noticeably on the offensive line. Sophomore Michael Carmody appeared to suffer an ankle injury on Saturday. He came out of the medical tent and appeared to be grimacing when trying to apply weight to his right foot, which was heavily taped. It’s tough for any QB when they throw right handed to see what’s coming from their “blindside” in the pocket. The injuries the last two weeks on the O-line have just kept racking up. When the offensive line can’t seem to stay away from the injury bug, the end result is low rush yards, and high sacks numbers and tackles for loss on your QB.

On the other hand, theirs chances of catching “lightning in a bottle” on offense as well. The Fightin’ Irish appeared to have been prepping Tyler Buchner for some plays against Toledo. Coach Kelly referenced in saying “so we’re trying to find a run game.” Buchner’s first ever run for the Fightin’ Irish was for 26 yards, his longest of the day. It was good foresight by Coach Kelly and Offensive Coordinator Rees. When you need lightning in a bottle, you do the needful. A great Coach has that vision.

Offensively, the Fightin’ Irish started quick once again on their first drive of the game. Their first drive was 6 plays, 75 yards and T.O.P. (Time Of Possession) was 2:15. This what Coach Kelly had asked of his team in his pre-game speech. Coan opened up with a 14 yard pass to Avery Davis, followed by a 28 yard pass to Michael Mayer. It wasn’t all pass though. Kyren Williams had a pair of 3 yard runs in between another Mayer 8 yard reception. Coan completed the drive with a 4 yard TD pass to Mayer.

On their second possession, the Fightin’ Irish struggle once again to get the run game going. The Irish continued to have success through the air though. Completions to Kevin Austin (7 yards and 9 yards), and Braden Lenzy (18 yards). Then it happened. Coan was hit for a loss of 8 yards and then fumbled the ball and Toledo took over on their TOL44.

The second quarter, started just like the first quarter for the Irish offense. The difference was that Buchner came in to take over on the Fightin’ Irish. On his first play, Buchner scampered for 26 yards and then the next play ran for 11 yards. That is exactly what Coach Kelly was looking for. The running of Buchner, opened up a passing play of 15 yard pass to Lenzy. The drive wrapped up on a 43 yard sprint by Williams to put the Irish up 14-6. The drive took 5 plays, 96 yards, and a T.O.P. of 2:13.

The next two possessions on offense lasted only 2:22 and a total of 20 yards. The Irish gave up possession on Downs after a a failed fourth and one run and an INT after two plays that led to a pick six for the Rockets The last drive stalled at the TOL47 after dropped Mayer target. The Irish go into the locker room down 16-14 after thirty minutes of Play

The third quarter not much happened at all. Offensively for the Irish opened with a couple of passes to Joe Wilkens for 14 yards. A pass to Austin for 13 yards, the three consecutive plays of negative yardage. The shining moment of the drive was Bramblett boot of 58 yards to the TOL19. The Irish had no running game at all to start the second half.

The second drive stalled once the Irish after starting with great field position at the UND49. Two plays for positive yards , got the Irish to the TOL37 which ended on missed 55 yard FG by Jonathan Doerer. The last drive for the Irish started on the UND15 and as the quarter came to an end the Irish were on the TOL45. Neither team scores and the score remains 16-14 Rockets.

Building on the last drive of the third quarter, Coach Kelly changed back to Buchner once again. After two successful rushes of 15 and 2 yards, and the drive stalling at the TOL27, Doerer kicks a 48 yard FG to put the Irish ahead 17-16. On the ensuing possession, Coach Kelly sticks with the Freshman QB. Buchner connects with Chris Tyree for a 55 yard TD pass to put the Irish up 24-16.

With the score29-24 Rockets, the Irish get the ball back with 1:40 to play. Going with the experienced QB, Coan connects with Austin for a 34 yard pass completion to the TOL41. After two Rocket penalties, for 17 yards, Coan connects with Mayer for an 18 yard TD reception. The Irish convert on a crazy two point conversion to give you a final score of 32-29.

The after last weeks defensive mayhem vs FSU, there was hope that the defense would step up to the challenge of their MAC opponent. That didn’t happen. The second play of the Rockets drive, Carter Bradley connected on a 66 yard pass to move right into Irish territory. The Irish defense did not break, allowing only a 31 yard FG instead of a touchdown. The score is 7-3 Irish. After the Coan sack, the Rockets get the ball back on the TOL44. After a 14 yard rush and 23 yard pass the defense stops the Rockets and forces another FG, this time from 32 yards. The defense bends again but doesn’t break and the score is now 7-6 Irish. Late in the quarter, Myron Tagovailoa-Amosa garners a sack on Carter and a loss of 4 yards.

The Rockets maintain the ball going into the second quarter. Isaiah Foskey gets himself another sack as Bradley was dropped for a 10 yards loss. On the next Rockets possession, they are down 14-6. The Irish defense forces a three and out possession for a total of 5 yards. After taking over on downs the Rocket offense had a great opportunity and they couldn’t make it count. After stalling at the UND05, the Rockets convert on another FG this time from 23 yards out. The defense to this point has only given up 9 points in the half. In retrospect, if those Field Goals are touchdowns, this game is completely different.

In the second quarter, the Fightin’ Irish only gave up 42 total yards and -2 yards rushing. The defense tightened up from last week. Only three big plays allowed in the first half. A 66 yard pass, 23 yard pass and a 14 yard rush all of which occurred in the first quarter.

In the third quarter the defense remained tight. The defense forced two three and outs, and a sack by JD Bertrand. They also allowed only 21 total yards and 5 yards in rushing. The defense only allowed one big play for 13 yards which was a run play. You can’t ask more from a defense that made adjustments at halftime. Score remained 16-14.

After being tight for two quarters, the defense got a little unraveled. The first play of the Rockets drive in the fourth quarter ended up being a 67 yard pass to move to the UND22. The Rockets then score on an 8 yard scamper to bring the score to 24-22 Irish after they failed on a two point conversion.

The next drive the Rockets come up big again on the defense. Two 15 yard passes and a 26 yard rush that gives the lead back to the Rockets with a score of 29-24.

The defense got lucky on the sack by (Tagovailoa-Amosa) and the fumble recovery by Bertrand to seal the victory for the Irish.

In the grand scheme of things, the defense did its job. Allowing only 132 yards rushing and 221 passing yards is not great but, an major improvement from the previous week. The offense on the other hand continues to struggle in the running game. When your Freshman QB is second in the the rushing stats, it shows there is a struggle on the offensive line. That is due to the injury bug that just won’t go away.

A special thank you to Tim Klopfenstein for the photos!

Next up for the Irish are the Purdue Boilermakers. Game is slated to be simulcast on Peacock and NBC at 2:30 PM EST on Saturday September 18th.