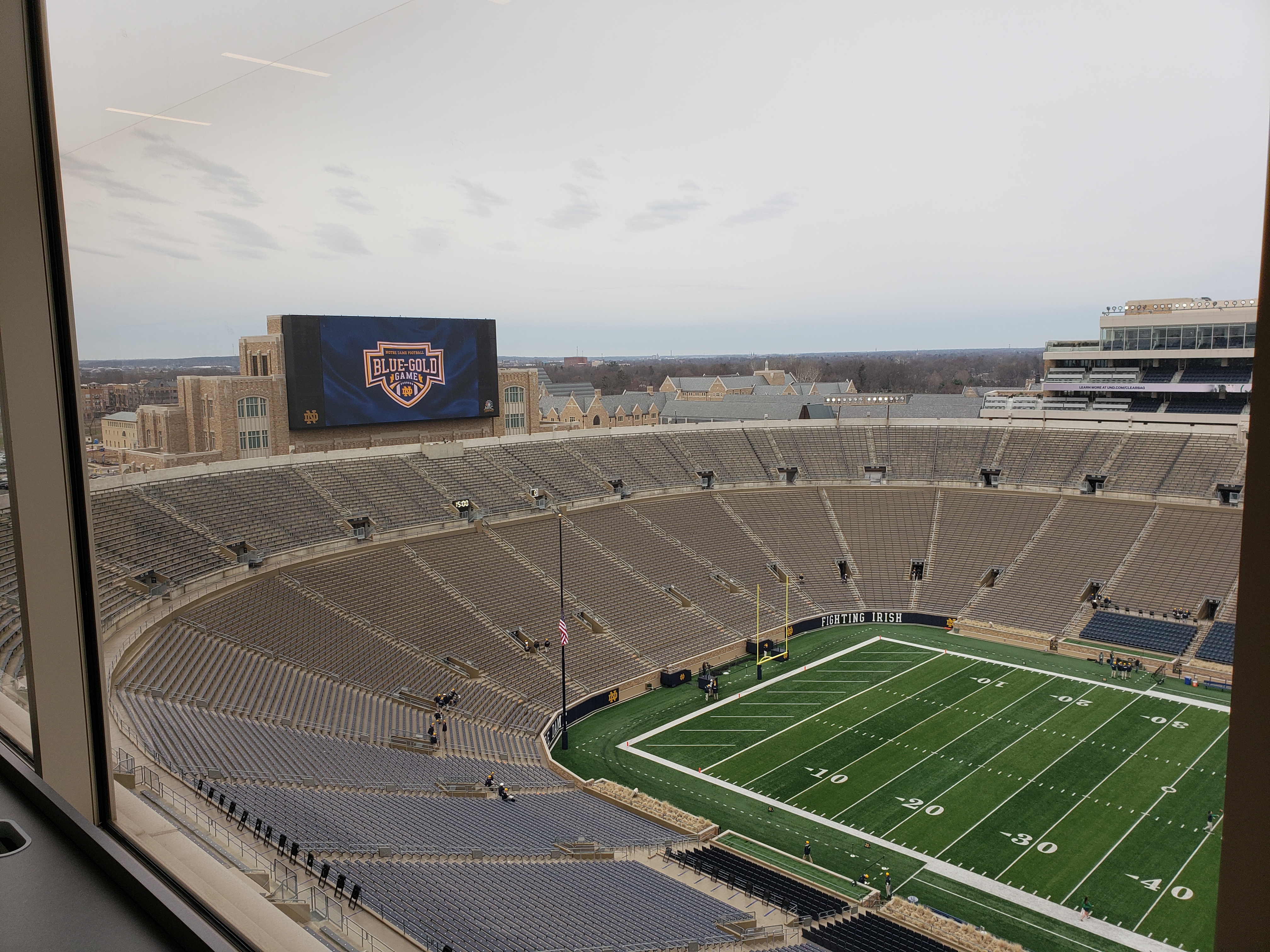 Spring has finally arrived in Northern Indiana! Spring has also arrived in time for the annual Blue and Gold Game. Besides the fans returning to the hallowed grounds of Notre Dame Stadium, Team 130 got a chance to kick-off the winter rust and get into the stadium and participate in a live practice session.

The Blue and Gold game for me is not about who is going to start on September 1st, it’s more of an opportunity to see the new players, get acquainted once again with the players who returned from last season, and to be in the stadium and what Team 130 will have to potentially offer.

The complicated part of the Spring Game was the scoring method. The defense also had an opportunity to score points, but we are not going to go into the science of defensive scoring.  This article will be about the Offense and the Defense will be in the next article.

Brandon Wimbush’s mechanics were much improved from last season. His delivery was much more fluid than last season. Brandon also showed signs of patience in the pocket and did not run that much. Brandon’s lack of running may have been limited due to this comment from Coach Kelly. “I wasn’t going to let him run. I told him, I am standing back out there on the field with a whistle, and I am going to blow it once you take off, so if you want the play to end with a sack, then that’s what you will do. If not, hang in there, keep your eyes down field and let’s try to make some plays. The emphasis here was to have him in the pocket.” Working with the Wide receivers and even the Tight Ends seemed to be the focus as to Running Back Tony Jones Jr just once.

Wimbush went 19-33, 341 yards, 2 TD, one INT and rushed for only 7 yards. Some notable passes were to Michael Young for 28 and Miles Boykin for 64 yards.  A play to note in which Wimbush showed some composure. In the second quarter, Wimbush can’t control the ball as it’s snapped, gets control of it and delivered to Chase Claypool for 19 yards. That is the stuff you need to experience early on to fix, but in the same time need to fall back on that experience when it’s in a game that counts.

Not to be out done, Ian Book had a solid day as well. After going 0-2 in attempts, Book connected with Chase Claypool for an 85-yard TD pass.  Book and Claypool hooked up for 112 yards of Book’s 292 total yards. Book finished the day 17-30, 1 TD and 0 INT. Ian had shown confidence in repetitions on Saturday as he is trying to land the starting QB spot.

Coach Kelly was asked about the starting QB job and he had this to say. “It’s pretty clear that Brandon got a chance out with the first group, and Ian played with the second group. That’s not etched in stone, but that’s the way they have been trending. And I don’t think there was anything today that changed that. We know Ian Book can win for us. So it’s 1A and 1B.

Miles Boykin had a great Spring Game. He was targeted 8 times, but had only three completions.  One catch was for 45 yards, another which was 64 yards for a TD and another for 23.

Coach Kelly on Boykin “he has been our top receiver, he’s been a big play receiver for us as well, something we struggled with last year. Miles’ changes that complexion, he is very difficult to defend, and if you do, you have to roll coverage up on him, you are going to borrow a Safety and that will give us the kind of running that is going to be effective as well.

Chase Claypool also had a great Spring Game. He was targeted 8 times, and had two incomplete passes.  Two of his catches were for a touchdown. As mentioned earlier, he had an 85-yard reception from Book and later a touchdown reception thrown from Wimbush for 6 yards. In all, Claypool racked up 151 total yards.

Coach Kelly had this to say about Claypool. “Getting his intensity level in the right place, his emotions, he wasn’t one of our calm, cool and collective guys last year but he is working on hard on that and the way he has practiced has allowed him to be more focused. If he continues trending this way, you got another ranging, physical Wide Receiver we can put on the field.”

Cole Kmet, Tight End saw some playing time as well on Saturday. Cole is also the starting Pitcher for ND Baseball. As I watched him play, a couple of observations came to mind. One observation was how great it was to see a TE getting playing time and how great it would be to develop a triple threat on offense. A threat in which you have a great RB, WR and TE all in on the same play. That would have teams scrambling to figure out who to cover. Secondly the fact that he is athletic as the great Jeff Samardzija. The ability to play two sports at Notre Dame is a very difficult.

The Blue and Gold game is in the books. 31,729 fans came to the stadium to see Team 130 show off a little bit of what is to come this fall. Wimbush and Book both appear to have a chance to be the starting QB this fall. Boykin has not lost a beat since the Citrus Bowl and is going to be a menace to defenses he plays against this fall. Claypool can be a second threat at WR if his development continues to where Coach Kelly thinks it is going. Lastly, how great would it be to actually give a TE a chance to be a play maker on the offensive side of the ball. Cheers and Go Irish!!