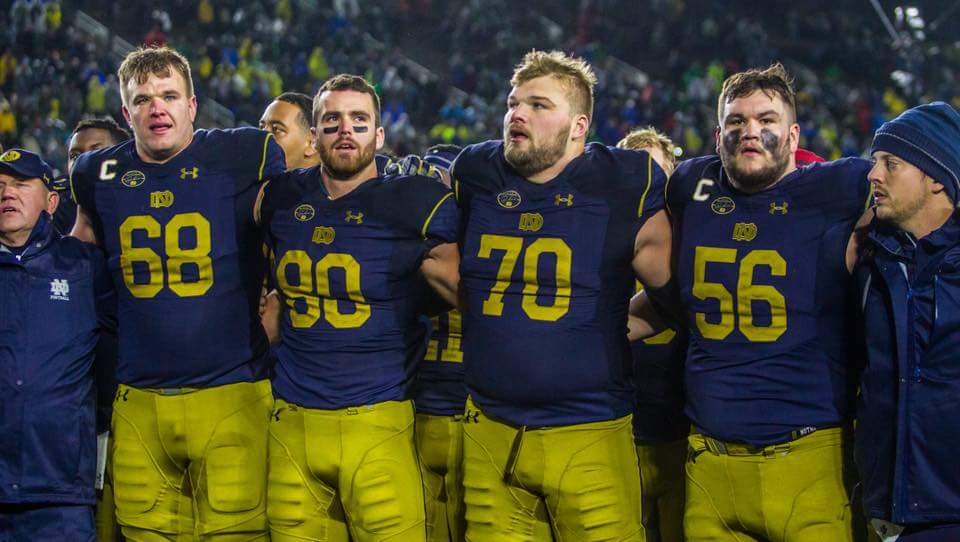 NFL Draft Day!! A day that is circled on calendars throughout the country. It’s also a day in which the Irish faithful watch to see where their big men will play in the NFL. This year, five Fighting Irish footballers were given an opportunity to show off their skills at the NFL Combine in Indianapolis. Junior Running Back Josh Adams, Junior Wide Receiver Equanimeous St Brown, Grad Student Offensive Tackle Mike McGlinchey, Grad Student Tight End Durham Smythe, and last but not least Senior Offensive Guard Quenton Nelson.

Quenton Nelson came off the NFL Draft board really quick. The sixth pick in the 2018 draft will stay in Indiana. The Colts selected Quenton to protect their quarterback Andrew Luck. Andrew Luck is going to enjoy having this big man in front protecting him on Sundays. Quenton Nelson had an absolute terrific Senior year at Notre Dame. Making the holes necessary for Josh Adams to do his #33Trucking magic. Per Michael Bertsch, Quenton Nelson was the seventh Notre Dame player drafted in the first round in the past seven years and the third offensive lineman. Nelson was the first offensive lineman selected in this years NFL draft. Quenton was named to the 2017 Concensus All American Team.

Hard work and dedication is what got Quenton and Mike picked so early in the the 2018 NFL Draft. Their leadership on and off the field is what the Notre Dame Value Stream is all about. When you punch the clock and do the work you go early in the NFL Draft. Irish fans should be very happy with the direction this team is going. Congratulations to both Quenton and Mike. Best wishes at the next level. Go Irish!!